Firstly, the stats… the 10/10 stats below leave a trends shortlist of 4: Daklondike / Kimberlite Candy / Potters Corner / Progress Drive. Clearly if they hold up, as they did at Haydock last week, one of those is winning.

Kimberlite Candy – I thought he was worth a go at 10s, albeit this morning he’s being nibbled but still plenty of 8s around… he appears to be getting the hang of the jumping game and it was his best run to date LTO, in a decent C2 at Sandown. He tracked the pace there, jumped well, and was doing all his best work late. He’s unexposed over staying trips (of course he may not get home but he runs as if he’s worth a go, and that’s why i wanted double figures), has course form, the yard are in fine form, and he looked the most interesting from my trends shortlist. He’s fit, in form, and should give it a good go, if running his race. He strengthened up before this season apparently, having been backwards,  and in the autumn he thumped Progress Drive at Ayr. I hope he may do so again, as clearly that’s a decent priced one on the stats shortlist that i’ve left. 7 year olds do just fine in this race – there isn’t a particular age that is preferred when looking at the stats, and he’s an exciting runner in this.

Kilkishen – one from left field I suppose but I did note that Irish trained runners are 3/14,4p in this race and it would be nice if he could add to those stats! He’s unexposed over fences and seemingly getting to grips with the game. He hacked up two starts back, powering away after the last. The two horses in behind him have since won so there’s some substance there. His trainer thinks he’s a dour stayer and after the last win said this was the target. It could be they wanted to get a run into him LTO, having maybe eased off him for a coupleweeks, or they changed plans and now this is an afterthought! That was a very deep race at Punchestown 13 days ago, packed with 140/145+ animals and a load of classier, dour, hardier types from team Gigginstown and Mullins. However he did plug on ok. I thought it interesting that Danny Mullins travels over and he knows him well. He may try and race up on the pace also and if he can get into a rhythm on the front end, he should just keep going. I thought he was worth chancing given his profile. Hopefully these two are in the front 1/4 of the field, lobbing along in their comfort zone.

Vicente – I should mention the fav who clearly may just be too good for them, but I can’t help but take on favs in these races, esp when under 8s. The Scottish National is the long term plan again so I don’t know if he’ll be fully tuned up for this and while it is officially good to soft, it’s not ‘spring good’ and it could be that dead/tacky sort which he may not like. A repeat of his Scottish National defeat last year may be good enough to put him in the mix against this field but he is open to attack from more unexposed ones who ‘could’ improve for this distance. He is the right fav, teh been there and done it horse at a classier level, and maybe i’m foolish to take him on, but that’s how I like to play it.

If he does lose clearly I may have picked the wrong two, as is my want in recent weeks on these pages.

Potters Corner and Progress Drive were high on my list and the last ones crossed off it – in the end it was the jumping of Potters which put me off – both runs at Wincanton he’s taken liberties at the fences up the home straight and I thought that his jumping could be under the pump in a race like this. IF he has a clear round he’s interesting and James may try and give him daylight on the front end. I do wonder if he has the class for a race like this also, and in the end fancied the Irish raider over him. And I fancied him over Progress Drive... he’s had a minor wind op since his last run and the days rest, in prep for a gruelling race like this – did put me off. Kimberlite did thump him at Ayr earlier in the season when conditions were fine, he was fancied, and his jumping was shoddy that day. It was better in CP at Kelso, but he didn’t run like a thorough stayer there and this is much deeper than that – he went up and down on the spot a tad after the last – so a couple of niggles but his trainer thinks he has a staying chase in him and he may well be thereabouts after the last.  I suppose when you place in a border’s national it’s hard to say he doesn’t stay. He was 14s and is the biggie I fear most having got wrong but there were just too many niggles for me. I’d have liked a more recent run/some more recent form.

Just Your Type is awfully short for one with his profile, having fallen LTO. Yes he’s unexposed but 13/2 is just ridiculous, whatever he does here. I can’t have him. I’m not sure I could have had him at twice this price. If he wins then so be it but I can’t have him at all.

Ange Des Malberaux.. has been thumped by the handicapper and while he’s improving fast, he does have a whiff of being a ‘summer horse’ to my eyes and i’m not sure as to the strength of his form. He does run as if staying and he couldn’t be in better form, but this is a step up in class and I was happy to leave him. I thought there could be classier stayers/with more in hand, than him here.

West of The Edge … he’s an awful price given his recent form and i’m sure he wants it much softer. I couldn’t have him either and he was outstayed in this last year.

Crosspark…he’s more interesting but has had a couple of goes in the Classic Chase which suggest to me that 3m5f just stretches him, and I’m not sure he’ll get home here over further. At least he has form in marathon tests and that is a positive, but I thought again that he was open to attack from something more progressive. He learnt to settle before this season hence some better recent form, but i’d like to think this may be too far for him. But, along with the Richards horse, he’s a lurker at 16s, and I can see why some would be interested. I’d like to think he’ll place at best.

Daklondike… I thought this would be too lively for him. All his best form is in proper heavy – ‘haydock heavy’ , dourly staying on when everything else has had enough. Maybe he’ll do that today but I couldn’t have him on this ground. He also has a big weight to lug around and the handicapper may have him now.

Baywing… I can leave a 10 year old who looks out of form and PU on their last start, even one who won the race last year. Again I think he wants it softer to slow everything down and this may happen too quick for him. But, I can leave him. I don’t like chasers that PU LTO going into big races like this – if they look out of form, most of the time they are. Famous last words.

Rock On Fruity…well his recent course form entitles him to respect but he’s not getting any younger, has stamina to prove (like many in fairness, inc mine) and i’m not sure he has the class, even if staying ok – those last two races were not the strongest and I assume Richie M had the choice. Of those 20s+ though, he’s the best of them to my eyes.

For a variety of reasons I can’t have Mysteree, Morney Wing, Harry The Viking and Raz De Maree and if one wins I was never destined to find the winner today.

Best of luck with any fancies. As I type my Irish poke is on the walk and Progress Drive is being backed. That would be typical! 🙂 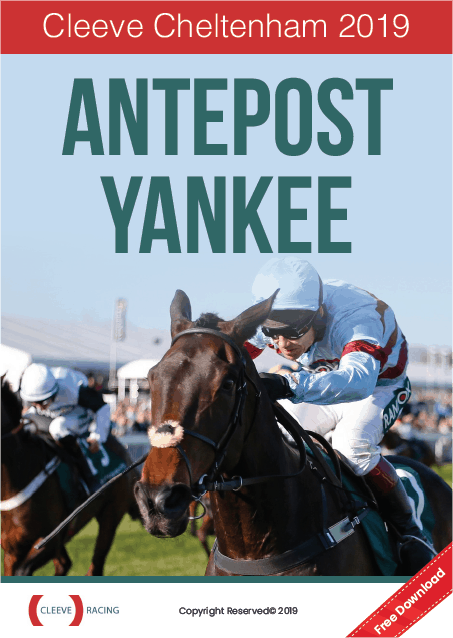