Over to Hugh for this week’s instalment…

Firstly, just a reminder of how my pre and post-race assessments are arrived at. The pre-race algorhythm score, ranging from 4.25 – 0, is a purely statistical score based on my subjective weighted assessments of factors such as trainer, breeding and jockey. I reassess these at the beginning of each season and adjust as the season goes along.

A good example might be R Hughes who in his debut season I started off rating highly as he seemed to have attracted good owners and I assumed he would follow the Hannon family model of having them pretty straight fto. However it soon became clear that he was more about bringing them on slowly and as time went on and no precocious ones appeared I downgraded him. Thus he started this season on a lower level, however Cardaw Lily at Ascot on Friday may have been the harbinger of a change of approach so I will keep him under review until/or if a new MO appears to be in place.

The post race numbers are my attempt to get as close as I can to the OR they may achieve in their 2yo season. I only rate the horses I have seen in the flesh as I am not yet confident to rate from the screen.

Turning to this week’s racing the highlight by far was the Ascot maiden which I have reviewed in depth. For me it was a reminder of where I am on the competence ladder… 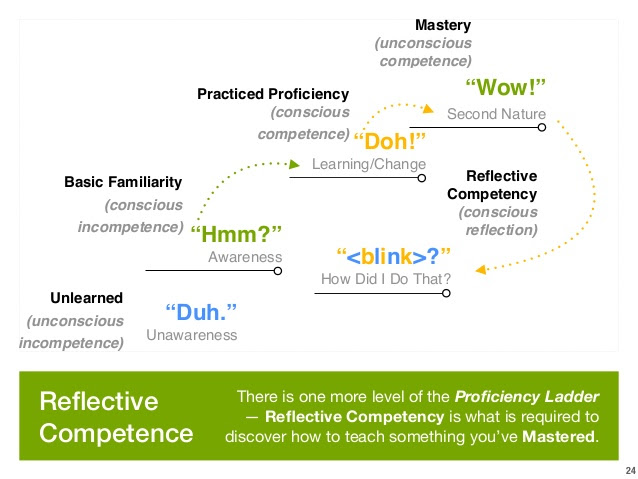 I think this image of the stages of competence is very helpful in assessing how you are getting on at paddock review. Most of the time is spent on level three with occasional backward slips and forward jumps to the adjacent levels.

It is easier to achieve mastery in deciding what is not going to win (ie sorting out the rubbish) than it is defining which, of say three runners, all around the same mark is going to come out on top on this occasion.

Using the Ascot maiden as an example I think it was practised proficiency that enabled me to judge that Out Of The Flames was not quite ready enough and perhaps the same to figure out that Ertiyad was overall the best model on the day. None of this stopped me from backing Ziarah as I thought the previous run and size would enable her to be involved and her racecraft might pull her through.

I then like to think that it was a moment of reflective competency that had me see the potential of Mrs Gallagher. It was a combination of condition, muscular definition and a swaying athletic walk and something else that one only sees out of the corner of the eye, one might almost call it intuition, but I think it is more that I have spent so much time immersed in looking at 2yos that it was reflective competency. I hope so anyway.

I think both Ertiyad and Out Of The Flames should compete at listed or Gp3 level and maybe higher. Mrs Gallagher looks like a 5f speedball and maybe could be up to the Queen Mary as long as one of those steroid enhanced American brutes does not turn up.

Thanks to Hugh for another interesting article. That is all for this week.